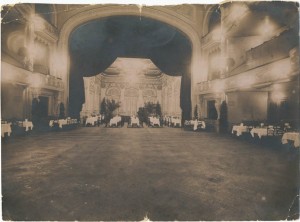 Last week I was participating in a highly inspiring congress about theater history , taking place in the city theater of Courtrai (Belgium). One would never dream of going to Courtrai for any other reason of course. And a good reason, why this congress took the stage there, I assume, was the discovery in 2008, by Prof. Bruno Forment (UGENT/VUB), in the catacombs of the very same city theater of an extensive collection with all kinds of untouched stage screens, -sets and – effects.

The collection was lying where it used to be originally, in the backstage and attic. Dating form the belle-époque and interwar period, some pieces where recently restored by the students of the Antwerp Academy. One of the sets stood shining in all its carousing beauty on the stage of the small theater where we were joining the lecturers for the day. The living proof that after all this ages gathering dust, they didn’t lose any of their colorful magic. The first lecture of the day, told us the whole story of course, but the other lectures were at least as interesting as the first. As was the public, being very international and widely interested. Lucky enough there was ample room for discussions. Some of the lecturers impressed me more than averagely, like Jed Wentz from the Amsterdam Concervatory for i.e. , demonstrating some 19th century annotation systems used to teach expressive declamation of texts (as Chironomia). Wentz talked not only about the systems, but also demonstrated what we can learn about something as ephemeral as historical acting styles.

The performance was impressive and Wentz dedication to his research incredible. At some point it seemed that he was even a little bit disturbed. The ‘text’ of notation systems can be so dense – indications for the movement and position of hands, feet, arms or the requiered energy of certain gestures are printed above, under and intermingled between the words of the text, along with suggestions for the volume of the speech delivered, tonal register, etc. etc. Making it quite impossible to perform the annotation without any background bias.

With the somewhat vague term of ‘bias’ I mean the kind of cerebral preoccupation caused by the complexity of the text interfering with the acting, making it very hard for an actor to concentrate fully on the performance. Some brain functions seam to work rather against than along with each other in practice. Compare it to the combination of making a phonecall whilst driving, a combination of activities considered potentially dangerous even by lawmakers. This has to do with the difficulty our human brain has with multitasking. Multitasking can be trained. Astronauts or fighter-jet pilots are known to be trained especially to develop the ability, but it is far from common or natural behaviour for most of us.

I’am not suggesting that Wentz’ performance was really deteriorating by this effect, but one could observe it all the same. It made me think of what you often see with folk-dancers concentrating too hard on the difficult choreography instead of the rendering of the dance and contact with the public. On perceives a kind of inward oriented gaze. Wentz was quite exhausted afterwards and had to catch his breath before he could answer the many questions coming from the audience.

Another parrallel with dancehistory I imagined is the impossible fascination for notation systems at the start of the 19th century like Chironomia. Around the same time 18th century notation systems where seriously altered, to gain a more radical control of all aspects of dancing style. The difficulty today is the quite impossible interpretation of this systems and the importance of personal interpretation. Exactly the point Wentz made and showed us. Fascinating.

A second lecture catching my attention was the one from Jiri Blaha, a Cech restauration manager, having been involved in the restauration of the Cesky Krumlov and Litomisl Theater. Both are exeptional well preserverd historical Theaters, comparable to Drottingholm near Stockholm, where Mozart’s Enchanted Flute was filmed by Ingmar Bergman. Both Cech theaters are completely preserved along with their rigs, machinery, backcloths, side panels, etc.

The inspiring aspect of Blaha’s approach is that he endeavours to retro-act on previous restauration trials, delivering new information about the potential for use of the pieces on stage. He even went so far as to acknowledge the fact that even after half a century of research and practice, one is never entirely sure of the exact use of some of the machinery and stage- effects. Which made me again think of my own experiences with dance history. Interpretation in both cases is theoretical. One can fine elements that look logical when combined, but often it is a mere process of trial and error to discover meaning.

The nice thing about this congress was the fact that professionals from staging and scenography were participating along with academics and performers. The experience was truly multidisciplinary in the good sense of that word. Leading quite naturally to interesting exchange and crossovers. I can imagine Timothy De Paepe (UA) visiting Cesky Krumlow for a frank appraisal of the theater and it’s functioninng with his extensive knowledge of 3D modeling approach in analysing theater machines from the past. Alas, I couldn’t attend the second day, because of some planned archive work in Leuven (Belgium). I promise to come back on that one, though. As I will probably come back on this congress and the experiences following from it as well.

Picture above: the dance-hall of the Courtrai theater ca 1920. This theater disposed of a movable parterre floor. An invention dating back to early 18th century examples like the one that used to exist in the Opera of the Louvre Palace in Paris. The use of this kind of machinery is quite exceptional for 19th century theaters. Copyright Fam. Sandra