When you are a dedicated follower of this blog, you might know that now and then I am guiding a tour in the center of Antwerp (Belgium). The goal is, by visiting some parts of the city specifically, to learn my guests to discover the city in a different way. After a while you look in wonder to some old storehouse apparently having been build originaly as a dance hall. The trouble with this kind of specialised tour is the time investement required to develop one. The Antwerp version of the tour is based on the research project I was involved in during the creation of the museum Vleeshuis. Nice and inspiring times, especially for passionate archive and museum rats like me.

Lets >>>> FFW >>>>. Anno 2013 I am living in Leuven. My native town and the place where I grew up for some time. In fact I don’t know a damn about dance history in this town. Not a nice conclusion for a blogger specialised in dance history to be honest.The few things I do know, I picked up from the rather excellent publications of the impressive Mr. Gilbert Huybens. And of course one dreams from time tot time about the possibilities. What I can do in Antwerp could easily be repeated in Leuven. Or not?

Of course, this kind of plans are far less evident than you think. I didn’t compare for nothing with my Antwerp research projects. It is quite something when you can freely explore the archives of an entire city for about two years. On the other hand: you can learn from your mistakes and by continuing research in smaller towns like Aalst en Sint-Niklaas I finetuned my technique and insights quite thouroughly.

Most interesting in that respect are the notable differences between a (originaly) market village (Sint-Niklaas), a small province town (Aalst) and a port town of some importance (like Antwerp used to be). Also interesting to note that Leuven – more or less as it is the case today – is drifting more or less in between this towns. It is a provincial town – no doubt about that – but is it is also lying in the shadow of court town Brussels. It sports a university of age and an important beer industry as well. In some respect, it might be comparable to Lier, another town the ancien city walls of wich remained intact until today. It sports a beer industry as well and lacks the university. But even then, it’s still so different. Is it the university or the lack of it? Is it culture, identity? One can discuss for ages of course, but nonetheless, it’s quite interesting to pause a while on these thoughts.

Meanwhile, I spent another two half days in the city archives of Leuven. And what did I discover? Nothing special realy. Most trends are very similar elsewhere I must say. Which didn’t come as a surpise to me of course. The city enforced national legislation on balls, dancehalls and the like and the situation evolved slowly from centralist legislation towards more local legal initiatives. Nonetheless, some parrallels are too good to be true. One of the first posts on this blog (from 2009 for that matter – only in Dutch currently) was about the relation between lanterns and dance halls in Borgerhout (Antwerp). My research at that time, focussed on a local city law from 1853 reenforcing an old rule from the 18th century that obliged pub owners to keep an oil lamp lit above the entry of their pubs from down until dusk. One century before 1853 this was a sound idea, considered necessary for the safety in the streets after dark. Streetlights didn’t exist systematicaly at that time so the decision was popular to some degree.

Nevertheless, the new law caused a storm of protest among Antwerp pub owners. This is not so curious as it seems at first sight too. In the 18th century, starting a new pub was quite an affair. One had to be rich in some respect, to be able to surmount longer periodes of necessity. Beerbrewers were all united in some specific ‘beerguild’ and didn’t sell beer to anyone either. So you better had to be well connected too. All this changed dramaticaly with the French taking over after the French revolution here in Belgium (around 1795). The economical boost Antwerp experienced by the ruling out of the ancient trade laws, was considerable. From 1795 till Waterloo the number of pubs rose with no less than 900 %. As a new economical power this industry became quite potent.

And having power, one better uses it sometimes. In the new economical context, this new law, enforcing the lanterns, was considered a direct attack on enterpreneurship and consequently withdrawn after a while. The funny thing is, that the same thing happened in Leuven some time earlier. On the 8th of may 1841 a comparable law was voted by the community counsel. After a long series of disputes with the central governement (the province and even the King himself intervened), it was withdrawn as well two years later. The law was technicaly unfeasable. You can check out for yourself (text in French). Perhaps it is too much about the gasconducts and the height of the flame burning, etc. One can image a GAS-agent (pun intended) climbing ladders in the middle of the street checking the height of the flame, melancholically observed by some old drunkard behind his next pint of the day. 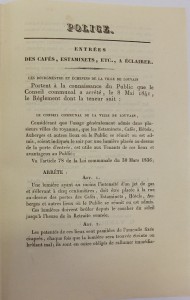 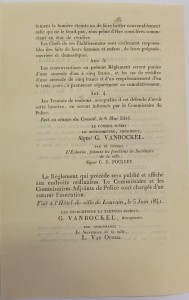 Of course it is interesting to see that the law was quickly withdrawn. It is, IMHO, even more interesting to find out that lights and pubs have a far more ancient intertwined history than one could possibly imagine. And for different reasons as today as well. Because of the light pollution on citycenters, having a neon on your pub is merely the only way to attract attention in the cacaphony of light surrounding you. And there are camera’s to guard our safety.

(With gratefull thanks to the city archives of Leuven to permit me the use of these (self made) pictures. (Ref: SAL MA 8883)