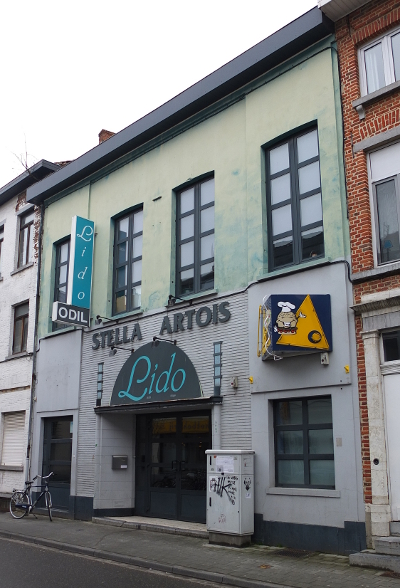 I live in this house, with many interruptions, from since I was two years old. About 40 years in other words. Until 10 years ago we were guarded day and night. In the entrance hall of the police station an the oposite site of the street used to be a bullet-proof glass window, where 24h/24h, 7/7 a young police recruit sat staring at our front door. The police station was eventually deserted, but until then, we were without doubt the best guarded Belgians ever. Even Mr. Dutroux doesn’t get that much police attention than we back then. We even thougth of replacing the bright white neon-lamp lighting the office behind the window by a nice red one. It never happened, though.

From time to time the police station even caused some trouble. To begin with, only one side of the street was available for parking cars. But some days also the other side was fenced off and crowded with enormous, mean looking, black combat vehicles, motors running, ready to take an assault at some innoncent protesting students elsewhere in the city. And every now and then even some really big watercanons took our street by surprise. But, this occasional annoyances aside, we the neighbours of the police station, didn’t have much in common with the troops camping there. Of course, we received more often than averagly some unfair penalities (i.e. for leaving the fog lamp on – you musn’t leave them on in the city, sir!). One day they even arrested our chicken, named Katrien. The fowl escaped from our garden to look for better worms the other side of the wall and ran straight into the arms of the lawkeeper on duty. At home Katrien wasn’t much of an egg – producing prodigy, but there in goal she managed to lay her first egg ever. Katrien of course was our hero after that feat. Even our cats were more respectful after her adventure in the police station.

You probably already noticed: I’am not a huge fan of police stations. The military in general doesn’t seem to grow on me. Although I read a fair amount of works about Napoleon’s ‘Grande Armée’ and the social mores of his troops recently. But that’s another story. On the other hand, I could myself ascertain in Antwerp as well as in Ghent that the neighbourhoods of army barracks of big police stations (in Belgium they were historicaly the same) used to be the richest in numbers of dance halls. In Antwerp for instance the ‘Kloosterstraat’ was such a place of perdition. At the end of that particular street used to lie the historical citadel which was only demolished completely in 1881. Of course there used also to be a part of the historical port at the currently very fashionable “Zuid”. But also near the Falconplein, where there used to be an policestation until 1941 and which was lying next to the ‘Noorderdokken’ (Northern Docklands), one could find important numbers of dance halls. Barracks and wharfs: a steady source of young, male clients guarenteed. Per se the place where stangers and passengers took their pleasure on the fly, without much of the regular social control being applicable or even possible.

In Ghent dance halls used to be concentrated in the Sint-Amandsstraat (next to the fantastic Sint-Pietersplein). Right on the junction of the historical university neighbourhood and the barracks of the Citadelpark. Again the combination of young, male passengers can be found and again the social control was rather loose. Ports, universities, barracks. There used to be a fourth place where one can find abundant numbers of dancing halls: the main roads leading to the citygates. Access roads are still the places where one will find dancings today. Because of the availablity of cars, they are implanted some miles away of the outskirts of our ill confined Belgian cities. In the 19the century they used to lie “within the gates” as one would call it. And again this used to be places with a larger than average numbers of male strangers passing by. Salesman mainly, heading for the market or on their way home, pockets filled with uncontrollable money. Later on, the neighourhoods of railwaystations took over this function. Places of arrival and departure by definition.

When I apply this analyses on my own neighbourhood, they seem to work out fine. The police station, the University Library and the Maria Theresia College all lie around the corner of each other. Within the triangle they form 8 out of 18 known dance halls active at the end of the 19th century can be found. I verified this during my last research days in the Leuven city archives. Even today one can discover the traces of this activity: party hall LIDO and the former STUDIO cinema venues are just a street away. Personally I remember the red lights behind the windows of some small brothels in the Maria-Theresiastraat very well. Even an 8 year old boy knew that these weren’t what you call ‘normal’ pubs. One could discover price current glued to the main window, posting unrealistic high prices for simple drinks like a coke or a beer. ‘Why does a simple coke costs about 80 franks in that pub?’ would be one of the embarrassing questions a kid could ask his parents coming back from the bakery with fresh rolls for breakfast on a Sunday morning. So last sunday I decided to go out and take some pictures of them. Or to be correct: what is left of them.

Without doubt to be continued…