Good intentions are made to be broken. Not that it would matter for my future schemes. And still. About a year ago I promised to blog again more frequently – I stopped posting new stuff regularly a couple of years earlier – and of course I didn’t manage.

But I still hope I will succeed this time. The reason is simple enough. My PhD. had been completed and defended (online that is) and all the due articles have been published. So lets hope now time is ripe for new challenges.

I even made up a list with possible topics and made a plan to put out one of these every couple of weeks. And by the way: I left Facebook more than a year ago and recently a couple of updates bricked my mobile phone twice in a row. That meant back to a couple dumb-phones (I used to have a dual SIM, now one nokia for each SIM, a black one and a white on – ying and yang so to say), no mobile data worries and no dead batteries any longer. Back to a life free of distraction and FOMO. I can highly recommend it to everybody. Swipe less, dance more!

Surely to be continued…

It has been a fair while posting my last piece here. More than two years in fact. So much happened since. I finished my PhD. for starters and left facebook, remarkably causing more people to visit this site than ever. But above all I discovered loads of fascinating stories I began longing to tell someone, somehow. Time to re-activate this blog and start posting. Like about this small sign I discovered just around the corner attached to the wall of a local groceries. There are no cinema’s around any more for a while now. The Studio’s as they were famously called in Leuven (Belgium) were demolished and some student homes build instead. So the sell by date of this little one has long passed. Streetarcheology or something. The world begins just outside one’s doorstep. 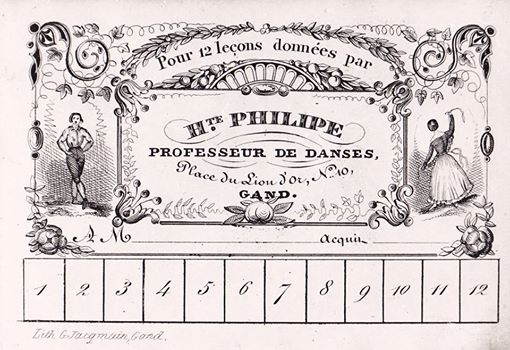 Société des Redoutes is starting a new project ! 19th century dancing is fun in a ballroom, but performing it on stage is a different matter.

Then we have to aim for the best quality in dancing and looking for the best choreographies.
So I am looking for excellent dancers, amators and (semi) professionals who want to join and learn in a new group based in Ghent, concentrating on 19th century society dance in all it’s splendour. It’s not about costumes, therapy or social meeting and easy to remember choreographies danced by all. It’s about DANCE like Dancing Masters wanted it in the 19th century , good dance research, good music. So if you feel you would like to join us as a dancer and dancing 19th century properly where everbody knows what to do : we can start planning WK classes etc… from autumn 2016 on !

It doesn’t matter how old you are but you have to be able to do an entrechat quatre or a decent ( tendre or double ?? ) pirouette or a temps brisé.

The first picture is a ” abonnement card ” for 12 classes in Ghent circa 1840. Private collection Lieven Baert. Who wants to use it again in Ghent ?