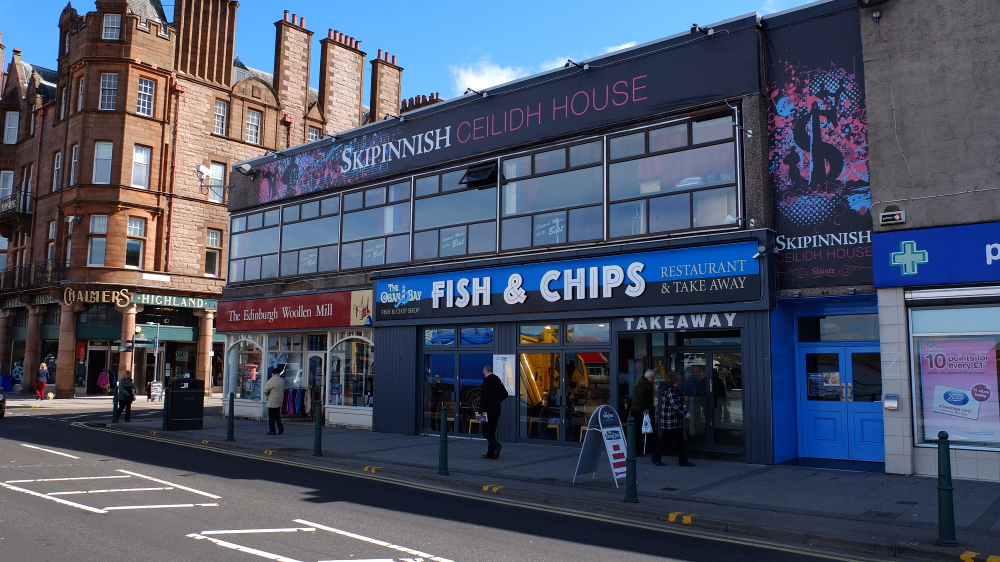 After a fairly tough, hilly day in the saddle (Tyndrum – Oban) on day 3 of our epic bicycle trip, we finally arrived in the illustrious Oban. I don’t know how the Brits – pardon me – the Scots do it, but a coastal city like this is rather unique and unthinkable in continental Europe. Talking about urbanism, I mean. In Oban,the highroad leading from Edinburgh and Glasgow, passes right along the quays and the heart of a small provincial town. Causing considerable traffic jams with Trucks and Vans an the like, which anyway don’t even belong there. It is rumoured – my wife claims this- that a natural reserve of major importance is draped around Oban’s suburbs, legally preventing the construction of a ring road. Not that I’am against preservation of open space or anything, but I can’t image that – apart for being a nuisance for the birds and wildlife, all this traffic is supposed healthy for the inhabitants. Of course, it would make things much easier when they just would abolish cars completely. By the way, this would make life of us, the cyclists, much more comfy.

Now Oban is also the hometown of Skippenish Ceilidh House, a true institute of traditional dancing, equally unknown this side of the channel. A Boombal – disco like place it is, (carry on, Boombal managers!), only providing life folk music for the dancing. The Scots think that this music and these dances are typically Scottish. I seriously doubt that. I rather think that the dances I saw there were more like belonging to the big pan-European contredance/quadrille melting pot, than anything else. But, OK, they are rather popular over there. The hipsters from the neighborhood showed up and drenched themselves in sweat jumping around on the dance floor. The business is even so renown that you can find there CD releases in every respectable post office on the isles.

Leaving us with a less nice feeling. The Scots really are heavily involved with regionalism and claimed identities. Really, the situation is not comparable with our own Flemish aspirations in that respect. In 2014 they will organize a referendum about independence and so, some of this regionalists (or should I call them nationalists?) are really raving. Can you imagine radio broadcasts offering a choice of military style march music, folk dances and hate – speeches? “Radio Milles Collines” is rather an appropriate name for this phenomenon, if one considers the hilly nature of West – Scottish geography. I was so unlucky to have to endure this nonsense for a while taking a shower under a blaring sound blaster.

What makes an average Scot, Brit, Portuguese or Swede – apart from their respective tongues – differ from each other, isn’t clear to me, but apparently seeking them differences out, deserves full attention of the mass media today. Identity IMHO is an individual matter and not a collective construct. Intelligence on the other hand is only possible as collective action. Lucky for us nationalists don’t know this. While they are messing with their supposed and invented identities on their own, we acting as a team, can search for more intelligent solutions while take a nip from our Single Malt. Comforting idea.