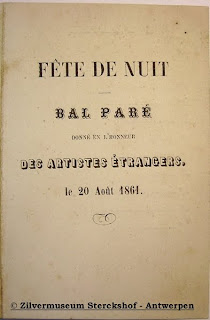 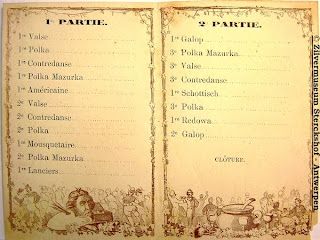 In this first part we will concentrate on the meaning of the dance programm of our ball. I discovered this one years ago in the archives of what is today the Silver Museum in Antwerp. The cover of the programm announces a “ Bal donné en l’honneur des artistes étrangers’ (Ball given in honour of the forgeign artists) for the 20th of August 1861. It seems to have been a Bal Paré. Nowhere the booklet says where the ball will be held. Further on in this series I will dive deeper into the meaning of this information, when I will treat the eyewitness accounts of this event.

Strange as it seems, a dance programm rarely shows any direct link with the reality of a ball. To begin with, you seldom know for sure whether the dancers actually danced the anounced programm or went through the dances in that particular order. Even more scarce than the programms themselves, are eyewitnesses from people having been present during the ball, actually describing the dances. If one considerers the relatively rareness of dance programms in comparison to the number of balls organised in a city at a given time, one should certainly reconsider their importance as a source for dance history. Thus dance programms are mostly offering isolated facts. And scientific paradigma suggest you better discard them or consider them with a lot of caution. Personally I’am not convinced that one can run to any conclusions based on dance programms alone. For example, it is hard to state:

That a particular dance or programm was “typical” for a certain era. There usually are statistically more exeptions than certainties

You can use them as a source for studying changing dance fashion. Dance programms are rather conservative compared to i.e. fashion press or dance manuals.

About this particular case I can only state that is follows dance fashion broadly from between 1855 and 1880. At that timeframe dance fashion rather changed little compared to the era just before and the one following. It is not particulary conservative compared to what you read in the dance manuals of the time.

I now will consider the relatively stable state of European dance fashion between 1855 en 1880 more in detail. It is generally acknowledged that polkamania conquered the Western world around 1845 starting from Paris. The polka then was followed by a complete series of fashionable couple dances like the Schottisch, Redowa & the Polka Mazurka as shown on this program. After 1855 it seems that this dance craze lost a bit of it’s inpiration on the matter of which dance historians have speculated heavily. Only to conclude that there is no reasonable all explaining theses to put foreward.

But also for the contredanses on the programm – rather quadrilles we would call them today – style changed considerably after 1845. Before, dancemanuals stressed the imporance of prodiguous footwork, acrobatic paces were from then on banned. For gentleman, that is, who were encouraged to walk lightly, cooly and even showing utter boredom through the entire dance. Ladies were still foregiven prodgidies on the dancefloor, albeit they were warned no longer to compete with ballet dancers. Ballerina’s by that time started to dance on pointes and floated around on the scene lightly clad in tule, remarkably different from the crinoline – style attire more commonly found in the ballroom.

Please notice the prominent position of the Quadrille des Lanciers ( Lancers), a tad before midnight, just before a break. A very similar position the dance was granted during the new year’s eve ball organised by ‘De Kunstvrienden’ in 1905: just before midnight. There seems a case in the making for defining a certain tradition here, altough it should be substansiated. The parrallel fascinates me all the same. And of course the gallop and the walz are present as old school viennes ballroom tradition from around 1780.

The only name of a dance I strugled with to discover what it actually meant, was the Mousquetaire. Historically there existed a Quadrille des Mousquetaires al right. It seems to have been an adaptation by Philippe Musard from 1846 of the musical themes of Halévy’s opera ‘Les Trois Mousquetaires de la Reine’. The opera was of course based on the Alexandre Dumas Père’s novel‘Les Trois Mousquétaires’ having appeared in 1844. The Musard quadrille is mentioned in the online Hofmeister XIX catalogue as having been published in 1846. It was in all likeliness one of those typical carnival – quadrilles Musard composed by the dozen. The link to Antwerp is nevertheless remarkable because the opera ad been performed there already in 1846, if we my believe this libretto printed by Ratinckx and which can be found in the Henrick Conscience Library there. And as we can deduce from the preserved musical library of the Société Royale d’Harmonie d’Anvers which resides in the library of the Antwerp Conservatory, the orchestra of the Société played several fantaisies and pot-pourries based on themes from this opera around the same time. The same orchestra happened to be well acquainted with quadrilles, walzes, polka’s and the like from the famous Musard or Julien.

Yet another possibility is of course that the dance was something completely different, if it were for example a member of the Cotillon family, of which dancing master Desrat mentions no less than 3333 different forms, among which a “Mousquetaire”. Around the middle of the 19th century the cotillon had become a kind of play-dance, led by the best dancers of the ball, following a certain theme. The musketeers in this case, I guess. A Cottillon was largely imporvised so the dancers didn’t know what to expect. To enhance the amusement all kind of attibutes like scarfs and sticks were used and special deals were made with the orchestra to insert appropriate music for the occasion.

There are elements to go for the cotillon idea. At the one hand a cotillon nearly always used to be the final dance on the programm. In this case the Mousquetaires is not explicitely called a cotillon so we remain in doubt. But surely the Cotillon was more fashionable around 1860 than a quadrille from 1846 could possibily be. The fashion of great thematic quadrilles laid years behind and dated even from before the polkamania. In fact the quadrille was so dreaded around that time that the Belgian dancing master Hazard says the polka saved our ballroom from utter boredom. Such an ‘old school’ quadrille on a dance programm from 1861 can only be considered conservative, which is, of course, another arguement ‘pro cotillon’. But because no eyewitness described the “Mousquetaires”, we will probably never know for sure.

In part 2 I will talk about the venue were the ball took place.

This article is part of series – the other parts are here