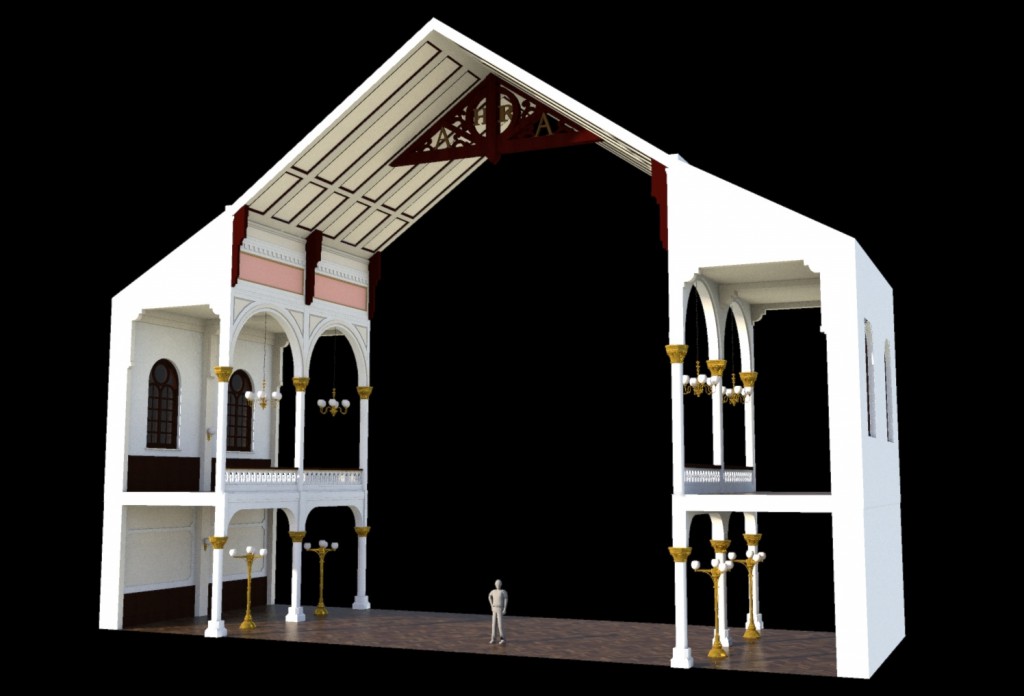 Last week I published a lengthy blog post on the ‘basilica-type’ floor plan, the classic layout for virtually any dancing hall around since the 18th century. Normally, it takes several weeks to concoct such a main course and it comes as no surprise it requires an unusual amount of motivation. So, this week I can offer you only a snack.

The stimulus, it must be said, was rather virtual too. Dr. Timothy De Paepe e-mailed me some exquisite “work in progress” pictures freshly forged on the anvil of his 3D devil’s kitchen. 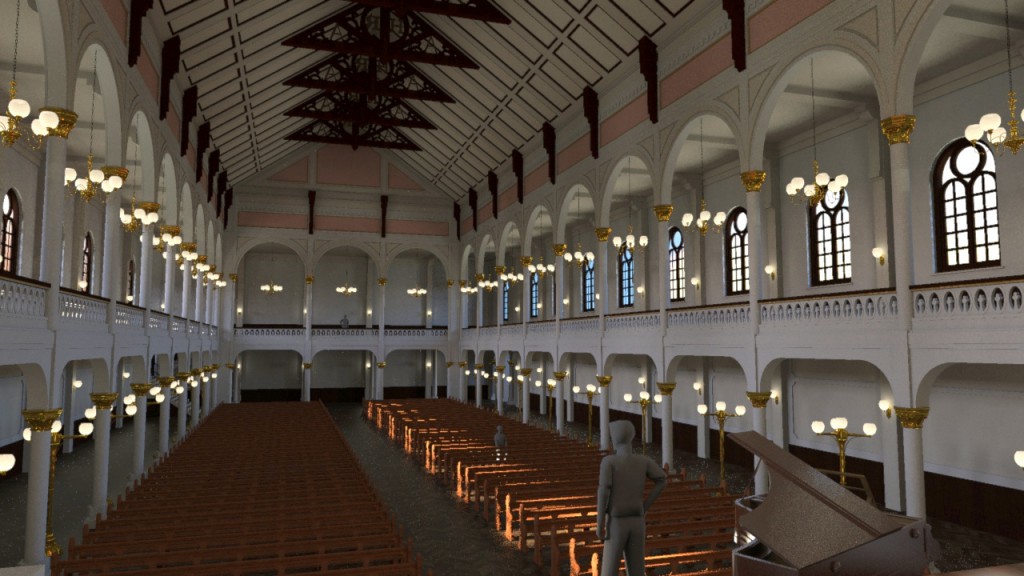 These are experimental visuals from the Winter Concert Hall of the Société Royale d’Harmonie d’Anvers in Antwerp, intended for a project by Jan De Wilde (jan.dewilde@ap.be)and Adelheid Ceulemans (adelheid.ceulemans@ap.be) respectively workin at the Antwerp Conservatory and Hogeschool Antwerpen. Their project wants to explore the circumstances in which Peter Benoit’s work ‘Ten Oorlog!’ (To War!), an oratorium based on Jan Van Breers’ texts, was premiered there in 1873. The pictures are meant to allow them to visualize the original venue, which, like so many historic concert halls, nowadays has vanished.

The building was erected in 1864 and at the time one of the biggest and most prestigeous concert halls in Belgium. But it wouldn’t be a proper 19th century concert hall if there weren’t any rogue parties being held in there too. And so annually, wild carnival balls took the stage, popular and famous for their vagrancy and villainy.

Alas, the poor thing was teared down as early as 1922 (nothing to do with cinema’s, though). It used to be located right on the spot where the parking lot “Arenberg” is situated at the Vaartplaats (Canal Square) in Antwerp. If you would one day intend to dump your car there (and I sincerely hope you won’t), please take the liberty to proceed to the rooftop. You might discover the last remainders of this magnificent hall. They’re really there. Honest.

The special thing is, Blacksmith Tim wrought his images in Google Sketchup, mainly after the old building plans I published back in 2007. It’s a hard to describe, but what a fantastic feeling looking at them in the flesh after so many years of mesmerizing winter hall’s dreams. Thank you so much Tim. Love your work.