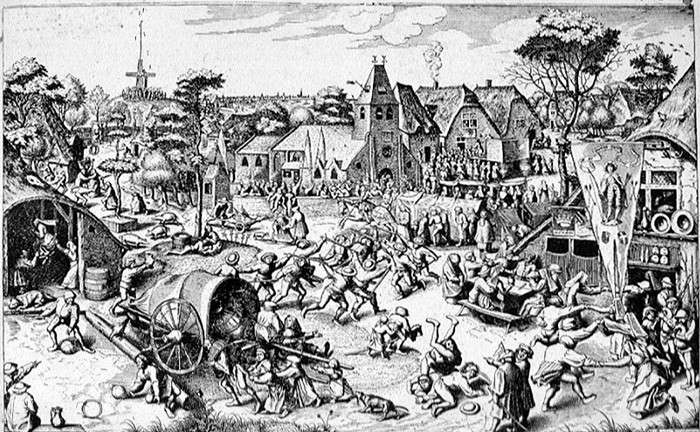 Sometimes one gets the opportunity to meet another dance historian in real life. Remarkable as it may seem, dance historians are a rare species on a worldwide scale. The chance to encounter one next door i.e. would be in my opinion as small as to get struck by a giant meteorite in your bed at night. And yet, it does happen from time to time (meeting a dance historian, I mean). In Belgian alone, I guess, we are fewer than a dozen. So, whenever a new one arrives, you better hurry to make your acquaintance, before he or she leaves the theater again. But miracles do happen, and most of the time they do when you expect them the less. Which was exactly the case some weeks ago when I was glad to give a lecture at Dranouter. Dranouter is an awful number of miles away from Leuven and the so called ‘Heuvelland’ is a lovely place for long walks through the hills. So, my wife and I decided to stay over the weekend. Yet, there was another good reason. Unexpected, I could arrange an appointment with none the less than Georgina BoyesGeorgina Boyes, who actually decided to come live in Westouter, a few miles away from the ominous ‘folk music capital’ of Flanders, Dranouter.

It was a lovely evening, at least for me, because when dance historians meet, there will be talk about research and articles. Which is all very boring stuff for the partners, by the way. And so we had a conversation about the house, the kids, the music and at last ‘the research’. To my surprise I learned, Georgina recently published an online article about the origins of British sword Dancing. Not that sword dancing is not interesting, on the contrary, but I didn’t know until now she was so well acqainted with that particular subject. And as usual, her article ended up upsetting quite a few folk dancers in the U.K. This, of course, didn’t come as a surprise to me. Some folk dancers are more than easily upset anyway. The reason behind their “upsetness”, is that they tend to have certain sentimental affections for all kind of historical theories about the origin of the dancing they practice. Having their way, it would be rare, unique in the world and ancient as mankind. Claims are made as far reaching as the old Greeks, Celts, Germans, Paganism, Stonehenge (which is dated even 2.000 years earlier than the tribes mentioned), etc. Proof for this claims: zero. Research to proof this claims: equally zero.

And so some hard stuck myths can carry on for generations among folk Dancers. Until the cruel day, one of their beloved stories is torn apart by a dance historian with sardonic pleasure. It happened to me as it happened to Georgina in the past and it probably will continue to happen the rest of our lives. My own accomplishments in this field are still less in number, but I’m pretty sure some Flemish folk dancers owe me one or more of their disillusions. Which actually isn’t very hard to come by. For example: folk dancers in Flanders claim that ‘their dances’ are to be unique for the village they were once recorded some time in the past, to save them for posterity (this bizarre idea exists not exclusively in Flanders by the way). This so called ‘traditional dances’ would in a way – which obviously cannot be rationally explained – carry the heavy burden of some massive local traditions or at least be inspired by the very spirit of them.

Therefore, it typically cannot simply be an ordinary ‘Quadrille’ but rather ‘THE Kadril (note the subtle change in orthography) of Bommerskonten’. Or something. Proving that the locals distilled after centuries in splendid isolation, their own kind of quadrille-like dance. Which is of course historically nonsense, regardless from which point of view you decide to argue. Whether you call it ‘variation’ or ‘invention’, a locality or a community, all by itself, seldom invents something that henceforward conquers the world. Individuals sometimes do. And typically for dance history: it are the individual dancers who embody the knowledge of the dance, not the village or ‘the community’. And whether the local stuff inspires them? We arguably should suppose it does! Mozart was more than probably inspired by local Prague beer or gorgeous waitresses whilst composing Don Giovanni to say the least. But in the end, it perhaps makes a good pub discussion, but bad dance history all the same. And so folk dancers are frequently offended whenever you break down some myth they cling to. It is a fate most dance historians share wherever they live on this planet. We are doomed to be appreciated as Very. Bad. People. It is our lot in life.

That said, the hypothesis Georgina put forward, is a bold one, mind that. But not unsound in my opinion. She simple tries to give a more rational explanation for the fact that sword dancing rarely occurs in British historical sources before the 18th century. Which contrasts starkly with the numerous examples here in Belgium between the 14th – 17th centuries. A very clever man (he used to be an engineer for that matter) Eugène Verstraeten published somewhere in 1982 a standard work about the subject(posthumnously). “Entre autre” he mentions the number of factual citations about sword dancing he could dig up from administrative sources like the bookkeeping of cities. Mr. Verstraeten worked in his sparce free hours about 50 years to accomplish this encyclopedic work and he dug up a great deal. His idea is (and serves some good arguments pro) that sword dancing originated from Flanderes and from there on spread in the rest of Europe.

What struck Goergina now, was the fact that it appears to have been an active British catholic Nicolas Blundel (1669 – 1737) who first describes a sword dance being performed in the Lancashire area. Not only did he describe the dance as such, Nicolas explains literally that he thought the dancers how to dance it. So it is not unlikely he mastered the dance before them. The question that arises immediately is: where did he learn it in turn? The date is also remarkable – 1712 – around the same time a typical British dance fashion – country dancing – started to conquer the world, having been introduced at the court of Versailles a bit earlier by Mr. Isaac, the dancing master of the Stuarts. Nicolas Blundel had been educated in Saint-Omer in the North of France and Flanders, where he could have picked up sword dancing. The reason he moved there temporarily had the same background as Mr. Isaac’s: because roman catholics where prosecuted in Britain in the years before and after the “Glorious Revolution”.

And there is never such a thing as coincidence, in my opinion and in Georgina’s as well. One should first look for a sound explanation considering the historical context of the actors involved, before unleashing wild guesses about stone- age tribal rituals or Anglo-Saxon pageantry. Historical fact proves that more than often prosecuted British Catholics were barred from university on the Isle so the sought education for their children abroad, which meant, in the catholic institutions there. Some of the most renown institutions at the time, were run by Jezuits, so it was quite natural for Blundel to seek his lessons there as his father and grandfather had done before him.

Jezuits here in Flanders at the time, were offering a well established school system that typically included high level tutoring of the performing arts: music, theater, speech and of course dance. To dance well was considered throughout the 17th and 18th century the “nec plus ultra” of good manners and a distinctive sign one was a ‘Gentil Homme’ (of Noble Blood or spirit). Having stayed for years abroad, having learned to dance well and to play music, one could, obviously, pick up some local dance habits.

Which is exactly what Georgina proposes as an hypothesis. Nicolas Blundel would originally have learned the sword dance in Flanders during his schooling and introduced the dance after his return to the locals of his area. Sometimes mentioning the injury is as good as inflicting it as far as folk dancers are concerned. Although, a hypothesis remains a hypothesis, a mere train of though or consideration which leads to sound questions, which in turn may or may not lead to further more focused investigation, that eventually may, or may not give an answers to the questions asked. The idea behind Georgina’s hypothesis is what is called ‘a cultural transfer’ or ‘distribution of repertoires’. The theory proposes that people meet and learn from each other. Which is true of course, and the more so when one considers dancing. Writing down dances always has been a risky affair, even for well trained dance teachers. So naturally, dancers learn quicker from each other than from books and thus “cultural transfer” seems a far more likely hypothesis than a ‘locality’inspiring ‘traditions’ or something. The difficulty, of course, is, that you can seldom prove directly from the sources that A learned from B or met B at all. And the chance you actually find such concise answers becomes even less likely, the further one goes back in time, regarding the fact that sources supposedly become more scarce.

But more generally, one could, of course, dive into the history of the jezuits schools here in Belgium and find out if some British refugees stayed here and how long. After that one could try to find out when and in what circumstances they returned to the Isle and in which circumstances they operated. And eventually one might take a look in their neighborhood to find out if the Sword Dances occurred before or after their return. All but questions of course, but the idea is good. Very good indeed.